Airport Body Scanners – Are You Being Zapped? 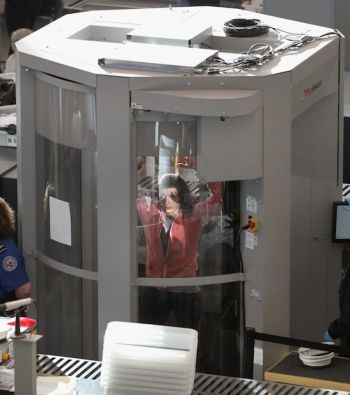 If you have ever traveled by airplane then you know you have to go through TSA Scanner searches. I'm sure you've wondered “Are Airport Body Scanners Safe?” Different types of radiation scanning machines use different technologies, some safer than others. But all have some amount of radiation. The type you really need to avoid is the backscatter x-ray type full body scanning machines. They are supposed to emit one tenth of a full chest X-ray full of radiation.

Can that possibly be safe? That was the question I asked myself before I subjected myself to this new form of personal invasion and surveillance. The first thing I found out is that ALL the Airline employees and pilots vehemently objected to this because they have to go through it many times a day. Secondly, there is a great public outcry about it, even to the point of having the Transportation Security Administration (TSA) being removed and replaced by private security instead.

Our government says it's “safe” while doctors at Johns Hopkins Hospital say it's radiation and microwave emissions will lead to skin cancer and tumors, DNA damage, advanced aging, among other health problems. I'm with the doctors on this one. In fact airplane travel is extremely low, even during the holiday season. People are concerned about them and their families being subjected to embarrassing “crotch” touching even of children! And the radiation poisoning is an unthinkable consequence.

Fortunately, there is something that we can do about X-Ray protection. Of course the best protection against radiation exposure from X-Rays that full body scanners at airports use is to avoid them completely. They tell you they're safe. The employees avoid it like the plague, and so should you. Don't listen to what they say unless it matches what they do. They avoid it and so do I. I opt for a hand scan instead. There are some things you can do if you don't have the time to avoid a radiation scan. If you are pregnant or have young children make sure to take some zeolites (shown at the bottom of this article) before and after you go through these scanners.

Grounding yourself (also called earthing) against radiation is good if you can do it. After you are subjected to radiation, make contact with the earth's natural energy field by taking your shoes off and standing or walking on grass or dirt somewhere. A beach is great. What this does is allows the earth's electromagnetic base frequency to give your body the electrons to balance the free radicals caused by radiation. You can also get a grounding pad to do this if you can't get outdoors.

I would also recommend using earthing shoes or ESD (electrostatic discharge) grounding shoes. What these shoes can do for you is allow you to make a direct connection to earth or ground, removing the harmful EMF's and providing your body with antioxidant support. Making an earthed connection removes the disease and aging free radicals from your body.

They help you relieve the stress from flying and dealing with the not always pleasant TSA and Airline employees, not to mention other passengers having a rough day. You can find earthing shoes for men or women, that you can use when you can't go barefoot. You only need to stand on grass, concrete or dirt for this to work the most effectively.  They have Earthing Shoes for Women and Earthing Shoes for Men.

Zeolite is made up of natural volcanic minerals and are created naturally when the hot lava and cool seawater meet.  It forms a clay like substance with a unique crystalline structure that is negatively charged. It attracts positively charged molecules, like the free radicals that cause disease and heavy metals like mercury and radiation. X-Ray Radiation causes cancer, and zeolite is a natural cancer remedy as well as a radiation and heavy metal detoxifier. It bonds to the them like a magnet and draws them in it's honeycomb like sticky structure and escorts them quickly out of your body, for good!

Be prepared and take some natural zeolite powder before going through a body scanner and also afterwards. Zeolites are amazing in that they protect against radiation, heavy metals, viruses and even cancer! I used it before I got my mercury fillings (dental amalgam fillings) out without even getting a headache. I recommend it to people who are going through cancer causing cancer treatments like radiation and chemotherapy too. It helps them with radiation sickness and the chemical poisoning of chemo. It also helps restore the immune system after it gets destroyed by those treatments.

I heartily recommend that you take some liquid zeolite before and after you submit to any kind of body scan where radiation is involved. And after you get scanned as well. It is good as a general body detox as it gets rid of all heavy metals and purges cancer causing substances. Avoid flying if you can, and if you can't then be sure to take some Zeolite with you.

Previous The Benefits of Sun Gazing and Earthing
Next Breathe Yoga